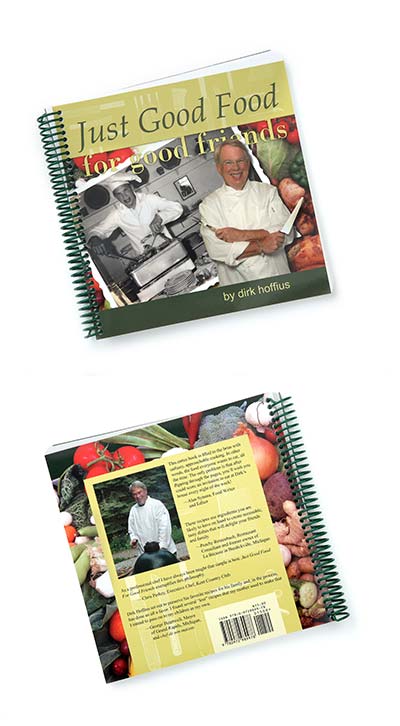 Dirk Hoffius has always loved to cook almost as much as he has loved to eat. When he was a teenager, he baked pies and breads for Christmas and birthday gifts. The picture of him, age 17, on the cover of his cookbook, Just Good Food for good friends, was taken when he worked for his aunt and uncle, Muriel and Gee Chamberlain, at the Point Nipigon Inn on the Straits of Michigan.
Dirk’s wife, Vickie, was his biggest fan, as long as his recipes didn't involve too many pans or ingredients, and also his most careful critic. “No, I don’t think this recipe is good enough,” she would say, and he would prepare yet another version of a recipe, until he finally heard the magic words, “That’s it! Don’t change anything!”

For many years he has practiced his cooking for Vickie and their friends at their home in Grand Rapids, Michigan, their cottage at Point Nipigon, and their beach house on the Isle of Palms, South Carolina. He borrows ideas for recipes from friends and strangers alike; in his cookbook he credits almost forty for “Assistance.” Vickie is recognized for every recipe in the book except Fruit Crisp, because she never ate fruit, with the exception of lemon (on vegetables) and lime (Key Lime Pie). Go figger.

Dirk is a graduate of Colgate University and the University of Virginia Law School. When not in the kitchen, he is an estate-planning attorney in Grand Rapids with the law firm of Varnum Riddering Schmidt & Howlett LLP. He is a board member of many groups in the Grand Rapids area, including the Frederik Meijer Gardens and Sculpture Foundation, and the Downtown Market, a mixed-use facility that brings together production, distribution, marketing, and education about locally sourced foods. He can be found in the aisles of Downtown Market several times a week. Shopkeepeers greet him—“Hey, Dirk!”—the way the bar patrons in Cheers welcomed Norm.

After he published Just Good Food for good friends, in which he included recipes for many spices, friends said, “Can’t we just buy the spices somewhere?” Now they can. Dirk is currently completing work on his second cookbook, due out in 2016